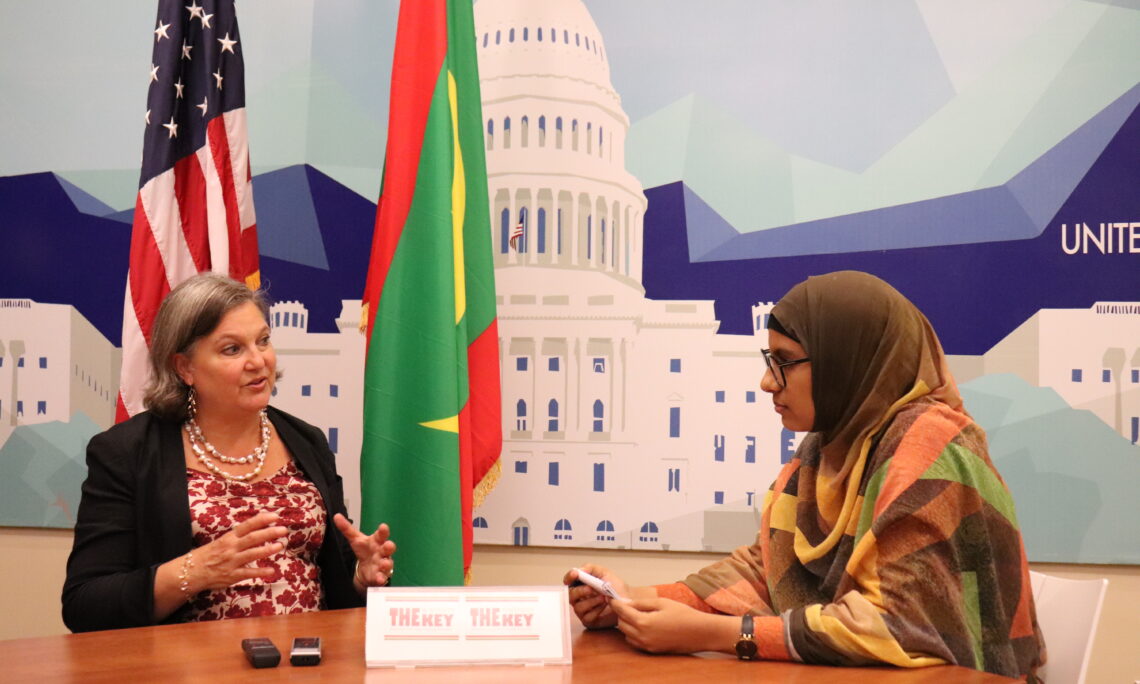 Under Secretary Nuland Interview with The Key

What is Your Excellency’s assessment of American-Mauritanian relations? What are the objectives behind your visit to Mauritania?

First of all, we had a great day today.  We had a chance to meet with the President, the Foreign Minister, and the Prime Minister, and, in addition, we talked with many human rights activists, as well as young entrepreneurs and those who are promoting entrepreneurship here in Mauritania.  The relationship between Mauritania and the United States is strong; it’s based on common values.  We have one of the strongest security partnerships in the region, both on the military side and on the counter terrorism side.  We are really pleased to see Mauritania able to maintain its own security, something that has been challenging for some other countries in the region. Mauritania, I would say, is a beacon of democracy, and a beacon of security, in this part of the world.  Not only that, but we are also beginning to see more of the kind of American investments here in Mauritania that we would like to see, particularly with the investment in offshore gas.  We want to attract more investment in this country, and there is certainly much more we can do together.  Green technology, agriculture, the education sector, to name just a few.  The United States is Mauritania’s partner in these areas and more – I’d also add human rights, and education.

Mauritania is currently preparing for national and local elections.  Are you satisfied with Mauritanians’ access to democracy?

This is one of the things President Ghazouani and I touched on in our meeting this morning.  The important thing about elections is the access. Ensuring that every eligible voter is able to register, that they understand their rights as citizens, that they are able to get to the polls and vote on election day – and of course, that every vote counts.  As you know, every democracy can be challenged on this front. In the United States, we are heading towards elections on November 8, and we are working on voting rights too – it’s a part of what good governance is about, making sure we deliver for our citizens.

Mauritania is a key partner country for the United States in the Sahel, a region at the crossroads of humanitarian, security, and climate crises.  What is the U.S. position on what is happening in the Sahel, especially the impact of growing Russian influence in the region?

We are really concerned.  Russia has not been a good friend to the Sahel countries.  It has not been a good friend in carrying out the war against Ukraine.  The trickle-down effects of this war are felt all over the world, but particularly in Africa, in terms of higher prices for food, energy prices going up, the increased difficulty with access to food and fertilizer, and so on.  And then of course, in this region, where Wagner, the Russian group, has inserted itself – with its guns, its rapacious economic practices, and its horrible human rights abuses – we are really very concerned.  We’re equally concerned about what’s going on in the Central African Republic and Mali, because Wagner is not an organization that wishes these countries well.  It is only about itself. Wagner steals resources and does whatever it needs to do, including abusing the local population and stealing the sovereignty of governments and people, to make itself rich.  And it does so at the behest of President Putin.  What it’s doing in the Ukraine crisis is even worse. We have all heard reports of Russian officials walking around neighborhoods looking for recruits, taking men off the street to fight in the war.  The war is immensely unpopular even in Russia.  So, as I said, we are quite concerned about Russian influence here, and we know that Mauritania is sending the message very strongly both in Mali and in other parts of Africa, that getting involved with Wagner is poison to any country.

What is your view of the role that women can play in the various crises affecting the Sahel?

Women can and should play a role in all fields.  As a country, er are at our best – only when everybody is participating.  To reach our potential as a society, we need to be able to tap into everyone’s potential, including women, if our democracy is going to be strong.  Otherwise, you are just leaving energy, talent, and creativity on the ground.  We are particularly focused on the new law to protect the rights of women and girls, to ensure that they know their rights.  Equal education and opportunities must be the same for little girls and boys, so they can grow into their full potential.  I am pleased to have this chance to work with a woman journalist in Mauritania!  I salute you as being a pioneer in your field.