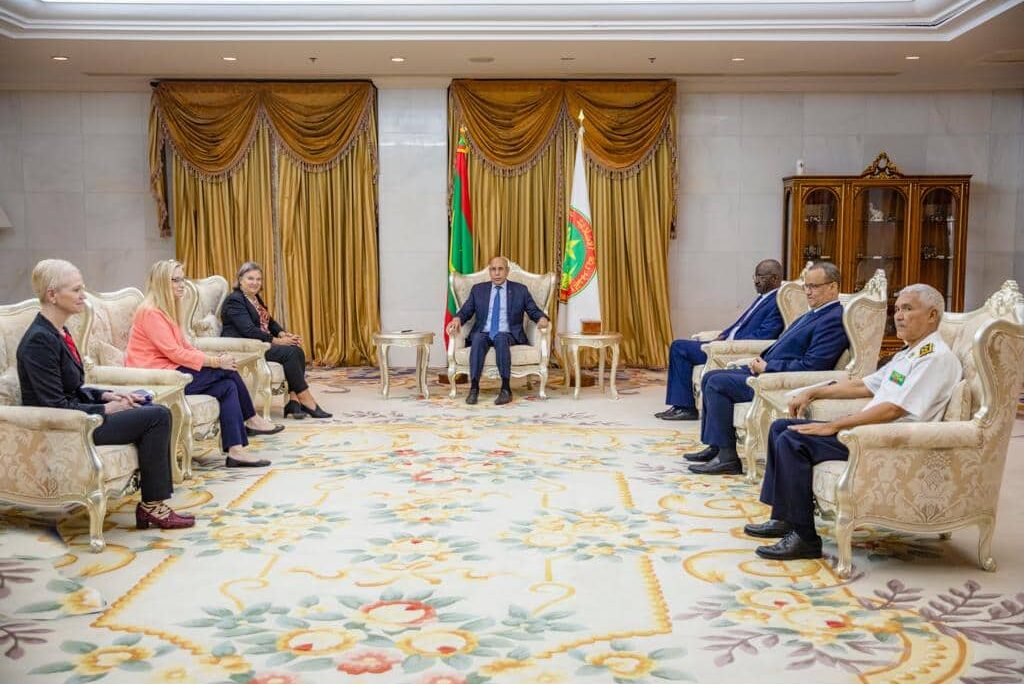 Good morning. I am delighted to be here in Mauritania today, my first stop on this visit to the Sahel. I’d like to first express my sincere appreciation for the warm welcome and generous hospitality that my colleagues and I have enjoyed since we arrived.

The United State and Mauritania have enjoyed a long partnership. Next month will mark 62 years since the United States was the first country to recognize Mauritania’s independence. This is a relationship that continues to build on trust, shared interests, and common goals.

For over a decade now, Mauritania has been an oasis of stability in the Sahel. The United States applauds Mauritania’s role in countering terrorist activity and preventing violent extremism. Because of the critical role Mauritania plays in strengthening regional security in the Sahel, the United States values its leadership, particularly as the host of the G5 Sahel Executive Secretariat and the G5 Sahel Defense College. And we look forward to continuing our security cooperation.

I would also like to thank the people of Mauritania for their hospitality towards the more than 80,000 Malian refugees who have had to flee violence and persecution. Your efforts to welcome and assist your neighbors in need are a testament to the good will of your citizens. The United States will continue to devote resources to help these and other vulnerable and displaced populations.

President Ghazouani and I had a frank and productive discussion about our work together on these and other shared goals. I am encouraged by his reform efforts, work on improving transparency, supporting social inclusion, and instituting key economic reforms.

We also discussed the most pressing global challenges of our time–COVID-19, climate shocks, and conflict—and the impact on growing food and energy insecurity. We reaffirmed our mutual condemnation of Russia’s unprovoked war against Ukraine, and its reverberations beyond Ukraine. Russia’s actions are exacerbating food security challenges—creating shortages, driving prices higher, and putting millions of Africans at increased risk of hunger.

The United States is committed to helping the people of Mauritania overcome food insecurity. In addition to being the single largest contributor to the World Food Program, the McGovern-Dole International Food for Education and Child Nutrition Program will provide $28.5 million over five years to feed almost 100,000 students annually in 320 primary schools in the Brakna, Gorgol, and Tagant regions.

On human rights, I congratulated President Ghazouani on the advances his administration has made to improve social inclusion and respect for human rights, but we both know more remains to be done. We discussed the need to identify and protect victims of slavery and to prosecute and hold slaveholders accountable, while recognizing the civil status of former slaves and their children so they can fully participate in Mauritania’s economy as valued citizens.

On COVID, the United States has proudly helped make life-saving vaccines available for everyone. We are the largest donor to COVAX, which has donated 1.64 million vaccine doses to Mauritania. I understand the Ministry of Health has been integral in working with international donors to ensure the vaccines reach Mauritanians throughout the country.

And we are committed to lifting up Mauritania’s youth. People under age 35 represent 70 percent of Mauritania’s population, and our USAID projects Tamkeen and Nafoore, backed by $24 million of investment, will provide training them with critical support. These projects provide skills and vocational training for sustainable job opportunities, training on conflict mitigation, and to build supportive youth networks.

Finally, a note on our growing economic relationship. Mauritania has welcomed U.S. trade and investment in the traditional energy sector and we expect and encourage additional U.S. investors and firms to partner with Mauritanian businesses in the important agriculture, fishing, and renewable energy sectors.

My visit here in Mauritania reflects President Biden’s commitment to strengthening American ties with our key African partners. Ambassador Kierscht and I are grateful for President Ghazouani’s time and friendship. Thank you, merci, shukran.