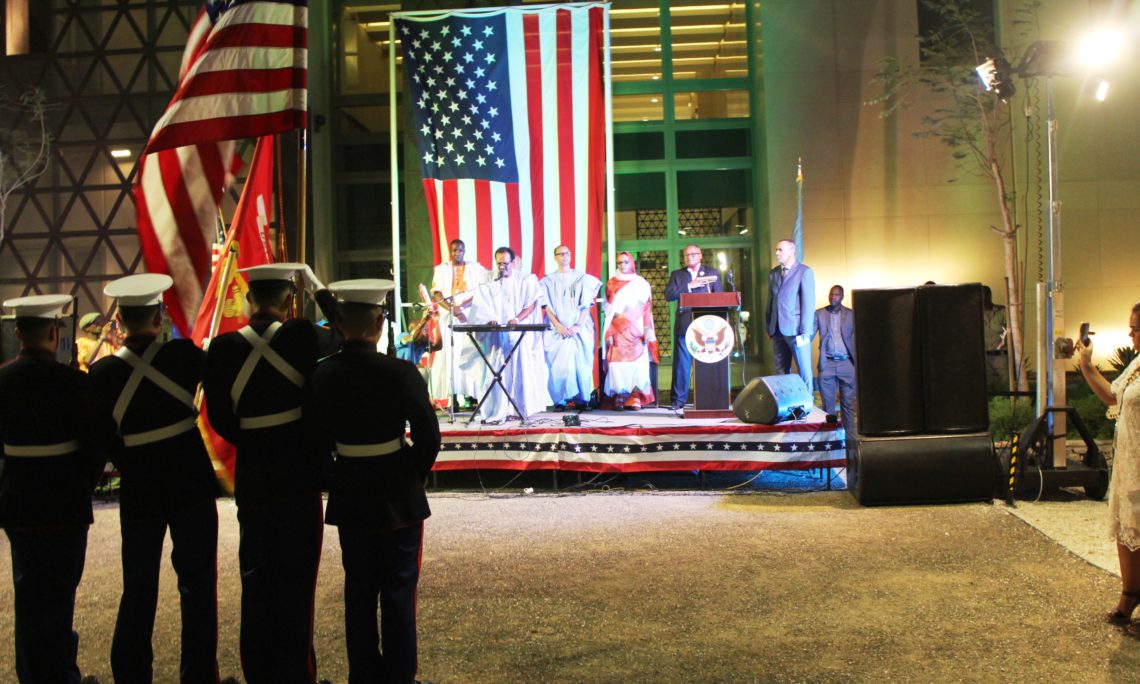 On behalf of Ambassador Larry André, who is in Washington DC on a temporary assignment, I am delighted that you have joined us this evening at our New Embassy Compound.

This facility is an expression of our confidence in the bright future of Mauritania and of the partnership between our two nations.

We will soon raise our flag over our new chancery and commence operating from this location. Inshallah!

Before beginning my remarks, I would like to thank Kosmos Energy for catering this evening’s festivities. Please give them a round of applause!

July 4, 2017 in Mauritania, like July 4, 1776, is a time to celebrate new beginnings. Nearly two and a half centuries ago today, Americans celebrated the adoption by our legislature of a Declaration of Independence from the British Empire. Thirteen former British colonies joined to form a new nation, the United States of America. Our political culture was profoundly shaped by the ideas expressed within the Declaration of Independence, especially this well-known passage:

“We hold these truths to be self-evident, that all men are created equal, that they are endowed by their Creator with certain unalienable rights that among these are life, liberty and the pursuit of happiness.
That to secure these rights, governments are instituted among men, deriving their just powers from the consent of the governed.”

Our history as a nation largely consists of efforts to live up to the high promise of those statements.

While Mauritania’s history, culture, and legal traditions differ from those of the United States, we know that Mauritanians also insist on their right to life (that is, security), to liberty (such as freedom of association, freedom of expression, and equality before the law), and to the pursuit of happiness (such as, economic opportunity and health).

Our partnership with Mauritania, based on mutual respect and shared interests, seeks to advance security, liberty, and prosperity for both Americans and Mauritanians.

As regards our security partnership, I note President Trump’s recent summit in Saudi Arabia with President Aziz and 55 other leaders of Muslim-majority countries.

These leaders committed to coordinate on eradicating terrorism. President Trump remarked that “There can be no coexistence with this violence.
There can be no tolerating it, no accepting it, no excusing it, and no ignoring it.Every time a terrorist murders an innocent person, and falsely invokes the name of God, it should be an insult to every person of faith. Terrorists do not worship God, they worship death.

Over the past year, the United States contributed toward the Mauritanian security forces’ success in defending their nation and in bringing greater security to the people of the Central African Republic. Our successes include:

* Equipping the Mauritanian Air Force with portable satellite communication systems that increase the ability to identify and remove threats to the nation.

* Training the 2nd Mauritanian Peacekeeping Battalion deployed to the UN peacekeeping mission in the Central African Republic, where the Mauritanian military is recognized as among the very finest and most capable peacekeeping contingents in that highly challenging mission.

* Joint U.S.-Mauritanian training as part of the Flintlock and Phoenix Express exercises, during which American soldiers worked with and learned from their Mauritanian counterparts.

In speaking of liberty, The United States congratulates the Mauritanian government for establishing anti-slavery courts and other steps taken to implement the 2016 anti-slavery law to eliminate the vestiges of slavery.

We also congratulate the government for taking steps to improve conditions at some prisons.

We note the lively reporting and debate in the media on previously taboo subjects such as slavery and its vestiges, the marginalization of Mauritanian citizens on ethnic, linguistic or caste basis, and on issues that concern the country’s constitution.

Mauritanians have strongly held views on many issues concerning their beloved nation. We see Mauritanians advancing those views through their republican institutions and expressing their views by exercising their right to freedom of association, including the right to peacefully demonstrate in favor of their views.

In terms of the pursuit of happiness, we congratulate Mauritania on the new Public-Private Partnerships law and continued eligibility for preferential trade privileges with the United States under the African Growth and Opportunity Act.

This year, the U.S. government will launch a $6.5 million three-year project to promote job skills training for Mauritanian youth, working closely with Mauritanian ministries. We will also establish the U.S.-Mauritanian Business Forum that will promote and advocate for greater trade and investment between American and Mauritanian businesses.

Kosmo’s joint venture with British Petroleum and the government of Mauritania is one success story of many to come. Inshallah!

Mission Mauritania’s education, sports and musical exchange programs have and will continue to produce excellent results for both Americans and Mauritanians.

We will continue our work with the Ministry of Health to protect Mauritanians from infectious diseases. We will seek to bolster our programs that assist communities with income generation and agricultural production projects throughout the country.

Ladies and gentlemen, honored guests, friends,
I’d like to invite you to enjoy this fine evening and the performances tonight, which we are thrilled to offer you in an esprit de partage, d’échange culturel et de célébration!

Please join me in welcoming our national anthem performer, Cheikh Lebleid, whom we are fortunate to have with us this evening.

And, all the way from the United States, please help me in welcoming Jaze Gurtrell, Wesley Stephenson and Jonathan Scales, who together make up the Jonathan Scales Fourchestra!

Please enjoy yourselves and I wish you the best of fortunes in your pursuit of happiness!
Happy Fourth of July!