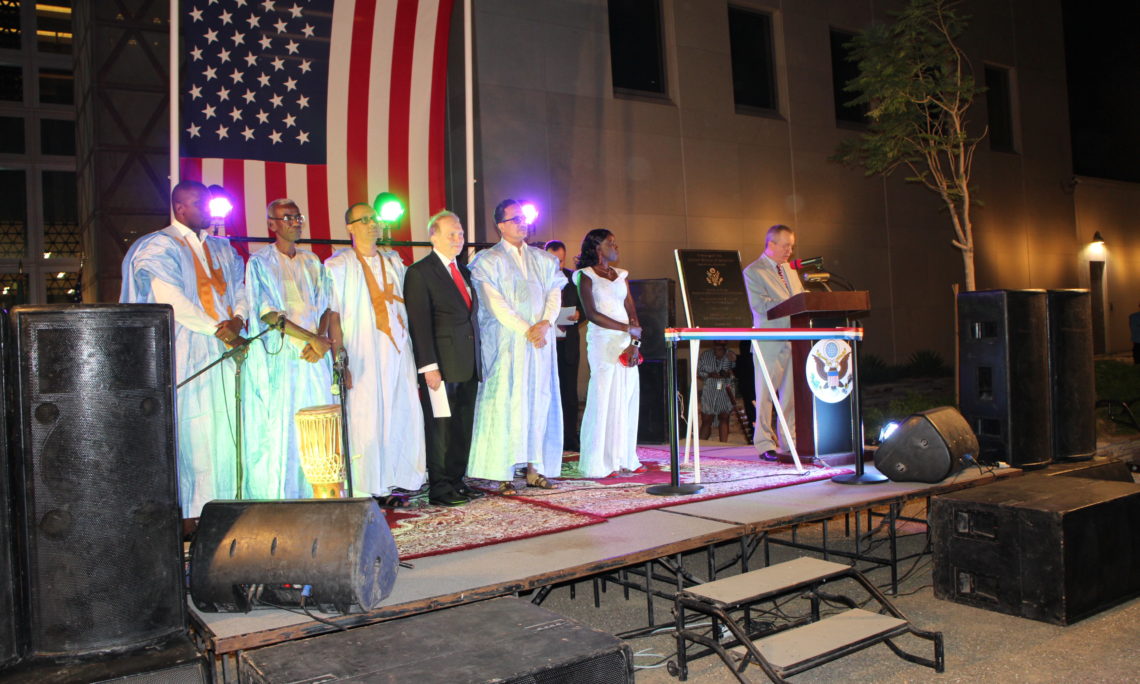 Welcome, Bienvenue, Marhaba. Thank you for joining us on this very special evening–the inauguration of the American people’s new embassy to the Islamic Republic of Mauritania. From this site, my colleagues and I will continue to promote close relations, based on shared interests and goodwill, between our two peoples, between their two governments, and between President Trump and President Abdul-Aziz.

Some of you have heard the story of my first visit to your fascinating country. In 1984, when I was serving as a Peace Corps Volunteer in Senegal, I decided to visit fellow volunteers working near Kaedi. Once I was half-way across the river, the pirogue boatman doubled the fare. I protested. Seeing a Mauritanian police officer on the far bank of the river, I told the boatman that we would submit our dispute to him. We did so. The officer decided in my favor, scolding the boatman! My memories of the kindness and hospitality of the Mauritanians I met on that visit have stayed with me ever since. Thirty years later, I returned to Mauritania as the American ambassador.

Through all Mauritania’s history as an independent nation, our diplomats and our Mauritanian colleagues at the United States embassy have been here, promoting friendship between our two peoples and their governments. Mauritania’s history has touched our compound. In 1976, three mortars fired by POLISARIO fighters landed inside the embassy compound. No one was harmed, but the ambassador’s vegetable garden was destroyed! In 2003, the exterior of the embassy compound was damaged in the tragic violence that followed a failed attempt to seize control of the government illegally.

My wife and I made close friends among the Mauritanians we have met. We have many precious memories of our travels throughout this vast country. We will soon end our time here. We do so with much sadness. We are sincerely grateful for your lasting friendship. We will never forget your hospitality, kindness and warmth.

I thank Ambassador William Moser, Mr. Benjamin Dille, and their colleagues for traveling from Washington to be with us tonight. Ambassador Moser, as the chief executive for all United States diplomatic properties overseas, played a key role in the successful completion of this construction project, the most technologically sophisticated buildings in Mauritania. I also wish to thank my colleagues who worked so hard to organize this celebration. Thank you too to my wife Deborah for accompanying me, tonight, and through all the experiences we have shared together while in Mauritania.

I close by thanking the Mauritanian artists who make this evening even more memorable, Noura mint Seymali and Fama Mbaye. I admire your beautiful performances and all you do to bring Mauritania’s rich culture to the attention of the world. We are honored that you and your fellow musicians have accepted our invitation to perform this evening.

Vive the friendship between Mauritania and the United States of America!