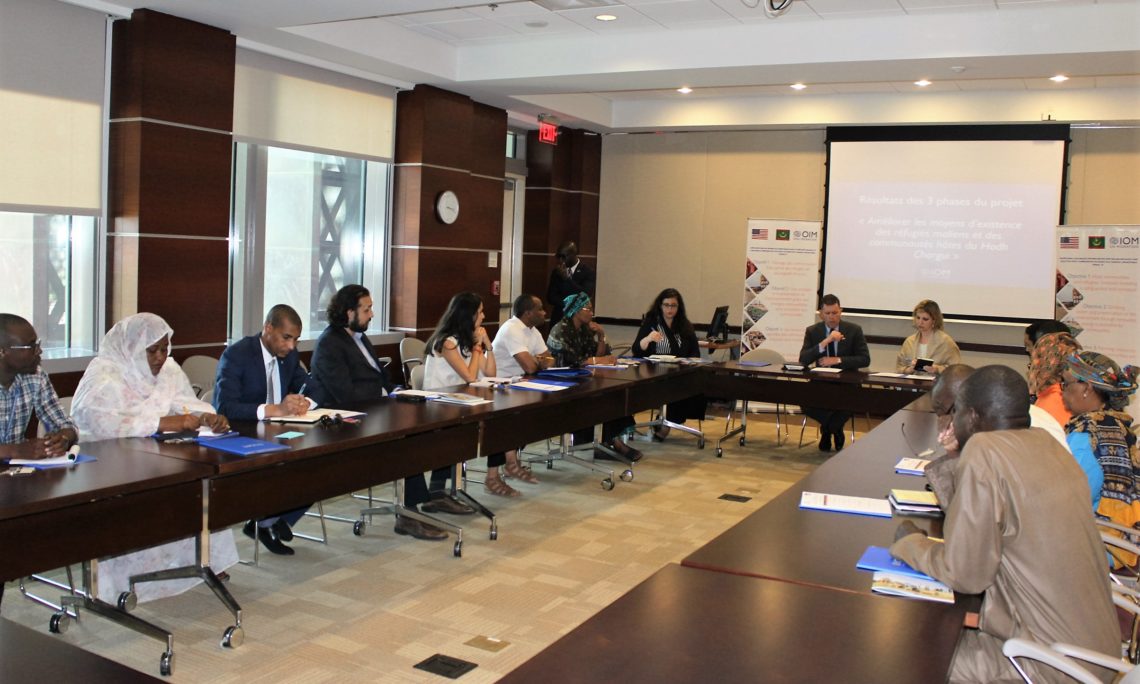 Improving the Living Conditions of Refugee Host Communities in Mauritania

Nouakchott – The Hodh Ech Chargui region of Mauritania faces challenges linked to access to water and animal health, with livestock being the only means of subsistence. More than 50,000 refugees who live in the camp and the host communities as well as the host populations are cattle farmers.

To address some of these challenges, Mauritanian government officials, UN agencies and NGOs gathered on the 11th April 2019 to answer the question “How can governments and the international humanitarian community improve the living conditions of refugee and host communities?”. IOM project manager, Momme Ducros, presented during the meeting, the results of the three phase-project “Increasing Livelihood Opportunities for Malian Refugees and Selected Host Communities in Hodh Ech Chargui” funded by the U.S. Department of State’s Bureau of Population, Refugees, and Migration (PRM) and implemented in Mauritania.

Implemented since 2015, the project allowed to substantially improve the livelihoods of refugees and host populations by establishing mechanisms to prevent and manage conflicts of scarce livelihood resources. In total around 20,000 refugees and 35,000 members of the host population benefited from support for income-generating activities, access to water, support for family rearing and inter-community dialogue, through the project.

In Mauritania, IOM has established a presence in the Hodh Ech Chargui region to respond to the influx of Malian refugees after the outbreak of the crisis in 2012. IOM’s activities in the region include community stabilization and community dialogues.

Opening the meeting, the Ambassador of the United States of America to Mauritania, Mr. Michael Dodman stressed that: “our understanding of proven approaches would allow us to have an impact in our way of serving and assisting populations in need in Mbera, in the Hodh el Chargui, and beyond”.

The meeting was the opportunity for Mauritanian government officials and the international humanitarian community in Mauritania to share best practices on community stabilization, resilience and livelihood recovery in a country at the center of the humanitarian, peace and development nexus.

“The constant support provided by the United States of America through PRM demonstrates its understanding of the vital needs of refugees and host populations in the Hodh Chargui, who today need more than ever to improve their livelihoods and prevent conflict over natural resources. I take this opportunity to launch a call for contributions from donors to fill the important gaps in the livelihoods sector in and outside the M’bera refugee camp.“, said Laura Lungarotti, IOM Mauritania Chief of Mission.

The project funded by the U.S. Department of State’s Bureau of Population, Refugees, and Migration (PRM) is critical to provide support to both refugees and host communities, reduce tension over scarce resources like water and the health of livestock.