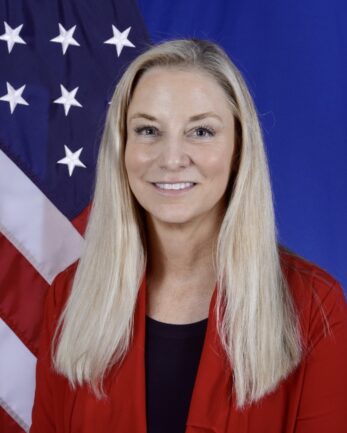 Ambassador Cynthia Kierscht, a Career Member of the Senior Foreign Service, was confirmed by the Senate on December 22, 2020, and sworn in as the U.S. Ambassador to the Islamic Republic of Mauritania on January 27, 2021. She previously served as the Deputy Assistant Secretary for Canada, Haiti and the Caribbean in the Bureau of Western Hemisphere Affairs (WHA) and as Director and Deputy Director in WHA’s Office of Canadian Affairs. From 2011-2016, Ms. Kierscht served in Bogotá, Colombia as the Cultural Affairs Officer, the Deputy Management Counselor, and the Coordinator for the Summit of the Americas.

In Washington, she served twice in the Bureau of Counterterrorism, in the WHA Office of the Executive Director, on the Secretariat Staff and in the Operations Center, and in the Near East Bureau. Her overseas assignments include the U.S. Embassy in Rabat, the U.S. Interests Section in Tripoli, the U.S. Embassy in Cairo, and the U.S. Consulate in Marseille. She has been the recipient of several Superior and Meritorious Honor Awards and speaks Arabic, French and Spanish.

Ms. Kierscht earned a B.A. in International Relations from Carleton College and a Masters in Public Policy from the Kennedy School of Government at Harvard University.