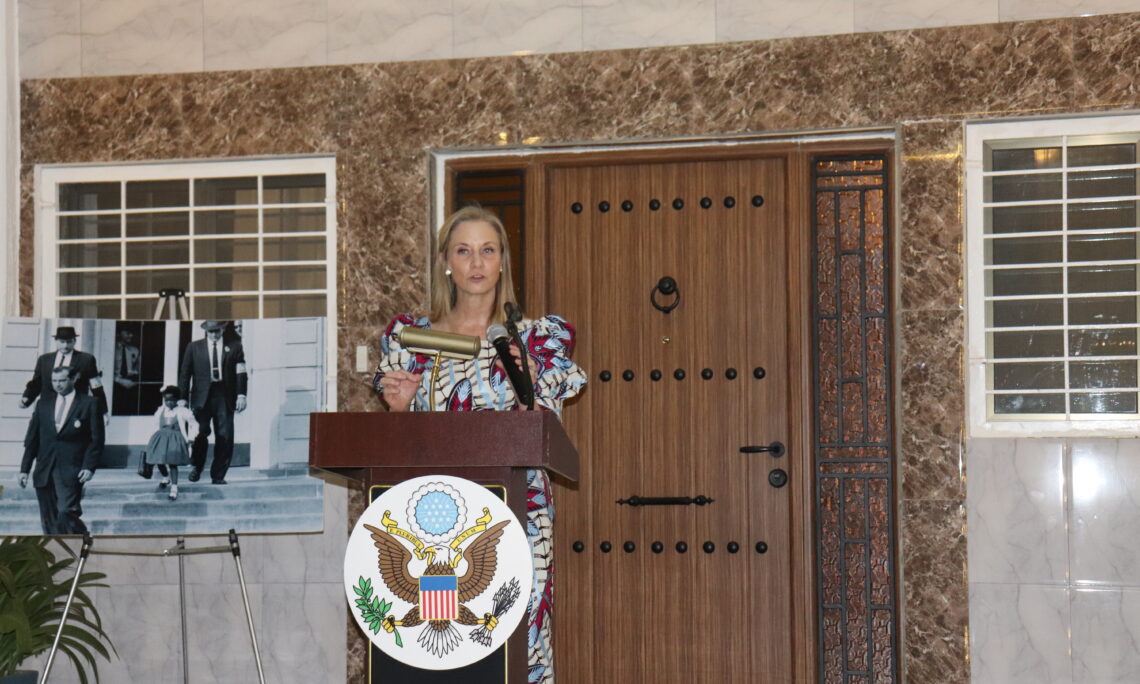 Welcome and good evening. Thank you for being here, I’m so happy to see everyone this evening.

I have the pleasure of introducing you to these excellent musicians who will provide our entertainment this evening. But before we get to that, I’d like us to take a moment to reflect on Black History Month and its significance for the United States and for the world.

Americans first celebrated Black History Month in 1926 to mark the contributions of African Americans to the United States. It was timed to coincide with the birthdays of President Abraham Lincoln, signer of the Emancipation Proclamation, and Frederick Douglass, who fought against slavery and became a social reformer after escaping enslavement.

It would be very easy to talk about Black History Month by listing the many accomplishments of black Americans – and there are certainly many to choose from.

People like Rosa Parks and Dr. Martin Luther King Jr. are well-known figures in the United States and around the world. Not to mention the unimaginable bravery of little Ruby Bridges, seen here walking to school surrounded by federal officers; sports legends, scientists, artists, writers, professors, scholars, and people like the mathematician Katherine Johnson, whose calculations, long before the arrival of computers, were essential to the success of the first crewed spaceflights. Not to mention the countless, anonymous slaves who quarried the stone and built the White House in Washington DC. The Black Lives Matter activists whose peaceful protests stirred a nation’s conscience… the list goes on and on.

But a mere list of accomplishments is not the reason we recognize and celebrate Black History Month. It is not a collection of names or events. It is much more than that. It’s about, as President Obama said, “taking a hard look at the past so we can create a better future.”

When we talk about Black History Month, we are talking about the history of the United States. We remember that although the United States was founded on the principle that all people were born equal, that was not the reality for many of our citizens, and it still is not the reality today. We speak of Black History Month to remind ourselves and acknowledge the gross injustices of the past, to chart the path we are on today and the work we still need to do. Because a major effort remains to be made.

Last year, the United States helped establish the Permanent Forum on People of African Descent at the United Nations General Assembly. In addition, President Biden signed into law the Juneteenth National Independence Day Act last June, in commemoration of the emancipation of African-American slaves. And closer to home, the State Department recently created the first Office of Diversity and Inclusion to address longstanding issues of bias and behavior within the department’s culture. These are certainly steps in the right direction, but we must continue our work of valuing the rich heritage of black people around the world and ending the scourges of racism and discrimination wherever they are found.

I invite you to join me, today and every day, in continuing the work of building a United States and a world that, in the beautiful words of poet Amanda Gorman, is “bruised, but whole. Benevolent, but bold, fierce, and free.”

Thank you. And now it is my pleasure to present to you our entertainment for tonight. Since the launch of her foundation in 2019, Fama M’Baye has organized social gatherings and music workshops for young people, as well as fund drives for poor women and children. She grew up in a family of griots and today directs the modern griot orchestra “Jallude Yella.” Because of her great accomplishments, the Embassy selected her to participate in the “OneBeat Sahara” program, an international program that brings together African and American musicians to write, produce and perform original music, and develop strategies for civic and social activism based on the arts. Without further ado, I ask you to join me in welcoming Fama Mbaye and Jallude Yella!