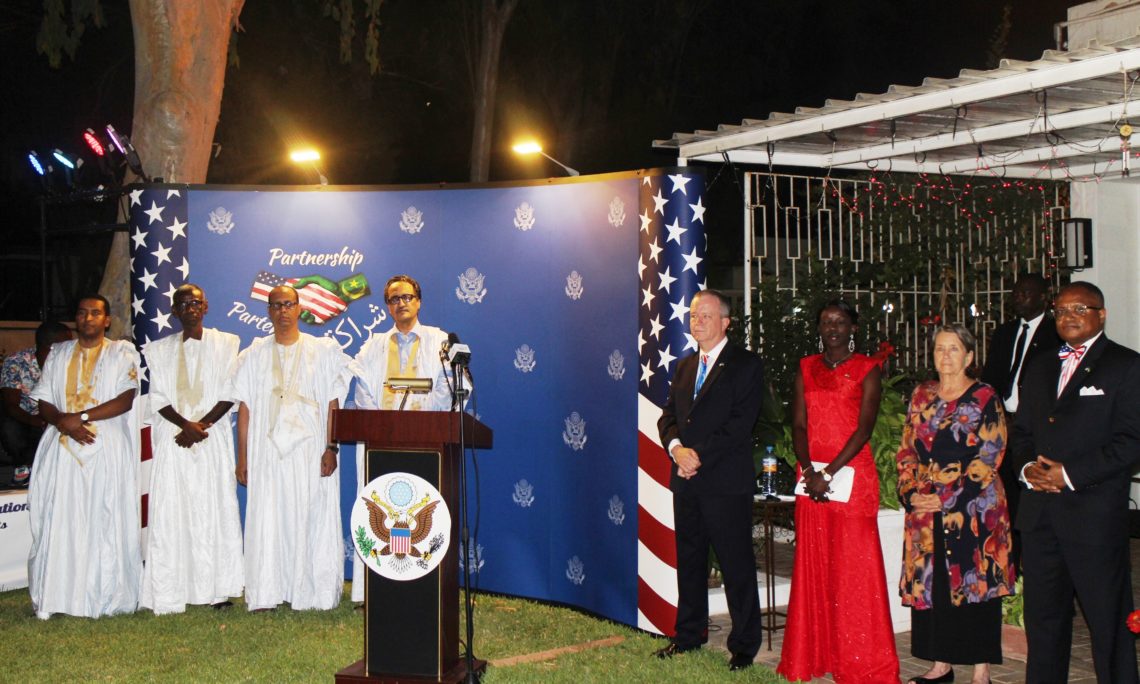 Welcome, Bienvenue, Marhaba to our celebration of the 240 year anniversary of our Declaration of Independence. In 1775 armed conflict began between American and British forces over American refusal to pay taxes to the British Parliament where they had no representation.  Only a minority sought independence from Britain. After the first year of war, those favoring independence had become the majority in the American continental congress. They voted to declare independence on July 2, 1776. Two days later, on July 4, 1776, our independence was proclaimed to the world.  Sultan Mohammed III from Morocco became the first foreign ruler to recognize our independence in 1777. In 1778 France recognized the United States and entered into a military alliance with the new country. Spain and the Netherlands also provided support. The war officially ended in 1783, seven years after the signing of the Declaration of Independence.

This history shows how partnership with other nations played a key role in our development from the earliest days of our national existence. Our partnership with Mauritania began in 1960 when, under President Dwight Eisenhower, the United States became the first country to recognize Mauritania’s independence.

In other areas of cooperation, the United States equipped the new engineering school in Aleg, trained Mauritanian business leaders on how to export to the United States, established cooperation between the United States Centers for Disease Control and the Mauritanian Ministry of Health, and funded community development projects throughout the country.  The United States continued its work with United Nations and Mauritanian officials to improve food security and to provide for the needs of Malian refugees.  Since this time last year, we fully sponsored the travel of 27 Mauritanians to the U.S. on education and cultural exchanges, the greatest number our embassy has ever sent. We increased our support to the educational programs, such as the English Access Micro-scholarship Program. Seeing that Mauritania’s youth too often lack the practical skills required for employment in the countries modernizing economy, the United States and Mauritania are working together to increase access to technical and professional education.

As a ally, we applaud Mauritania’s many achievements over the past year.  The deployment of a peacekeeping battalion to the Central African Republic, the continued hosting of Malian refugees and recent signing of the tripartite agreement on refugee returns, and the advances made in the last year in implementing the agenda of the G5 Sahel, with its headquarters here in Nouakchott, are major contributions by Mauritania to regional peace and security. So too was the regional youth conference organized by the Ministry of Youth and Sport last July, and the regional conference on countering violent extremism sponsored by His Excellency the President last August.  After six years of attacks on Mauritania by violent extremists, the Mauritanian government and its security forces, with the full participation of religious leaders and the Mauritanian people, secured their country. There have been no further attacks in the last five years.  Mash’Allah! Sadly, my country cannot say the same. I was asked why the United States sent such a large delegation to the August conference on countering violent extremism. The answer is simple:  we have a lot to learn from Mauritania’s success.  Mauritania is taking an increasingly prominent role in world affairs. This is evident in Mauritania’s Presidency of the African Union in 2014, recent elections of Mauritanians to senior leadership positions within the United Nations, and, of course, hosting of the Arab League later this month.

Also, the Mauritanian President has set a good example for African and Arab leaders by rejecting calls for him to seek a third term. Instead, he has chosen to respect the Mauritanian constitution.

Mauritania took an important step toward preserving its rich marine resources by launching the Fisheries Transparency Initiative, working closely with global experts and other countries.

My family and I have already taken two trips in and out of Oumtounsy International Airport. This advanced and impressive facility is yet another major national achievement of the Mauritanian government worthy of high praise.

We also welcome the success of Mauritania in the fight against slavery and its vestiges.

The 2015 anti-slavery law and its rapid implementation, including the setting up of regional anti-slavery courts and prosecutions under the law, promises to finally free Mauritania from this ancient and abusive practice and its vestiges.  Three Mauritanian civil society leaders were recognized with prestigious awards this year from United States Secretary of State John Kerry.  They are Fatimata M’Baye, Brahim Bilal Ramdhane, and Biram Dah Ould Abeid.  We encourage government and civil society to work together to advance shared goals.  A fine recent example of that is the cooperation between the Justice Ministry and the civil society organization SOS-Esclaves regarding the identification of cases to be tried by the regional anti-slavery courts.

My Country recently has suffered tragedies related to the effects of our lack of social cohesion related to our history of slavery and its vestiges. Several Mauritanian friends expressed their solidarity with the American people.  As I mentioned last year during our Independence Day celebration, the stories of our two countries have unfortunate similarities. Like Mauritania, we are still struggling to overcome the legacy of our past and to build a better country for all our citizens.

Partners of course are not required to follow one another’s advice, but they usually give one another’s advice careful consideration.  The highest levels of the United States government regularly seek advice on regional security issues from the President of Mauritania.  We gratefully receive this advice and usually apply it to our policies.  We coordinate closely as concerns the Malian peace accords.  On our side, we offer advice to Mauritanian leaders on such topics as promotion of foreign investment. Capital is a coward.  People tend not to invest their money when too many factors are unknown.  Government can remove some of these unknowns by consistently applying regulations and making those rules well understood by the private sector.

Before closing, I wish to thank my colleagues who worked so hard to organize this celebration. I also wish to thank my mother Kathleen Hoyt for traveling from Austin, Texas to join my wife Deborah and me in hosting this event.  She listened to our stories about the beauty of this fascinating country and the hospitality of the Mauritanian people. She wanted to discover Mauritania, so she joined us on our recent trips to Kiffa and Rosso.

I also would like to recognize our special guests tonight, the American musical duo of Greg Engle and Stephen Doster, as well as the Mauritanian trio led by Cheikh Lebyad. Cheikh, I am grateful for your beautiful performance of the Mauritanian and American national anthems. Through their shared love of music, these musicians build a bridge between our two countries.  After all, Mauritania and the United States are neighbors, only separated by a bit of water!

Now, permit me to address a few words in English to my fellow Americans.

Tonight we have special guests among us: seven members of the Leggett family. This family suffered a tragic loss in 2009 when Christopher Leggett was murdered in Nouakchott by Al Qaeda killers. Chris’s family reacted to that loss with love and service, which those who knew him tell me was typical of their beloved Christopher. As a result of their dedication, the important work Chris was doing here in Mauritania is still continuing. We are honored by their presence here tonight.

Now I will turn the stage back to the musicians who bring so much inspiration and joy to our celebration. Traveling from my home state of Texas, I warmly welcome Greg Engle and Stephen Doster.

Vive the partnership between Mauritania and the United States of America.