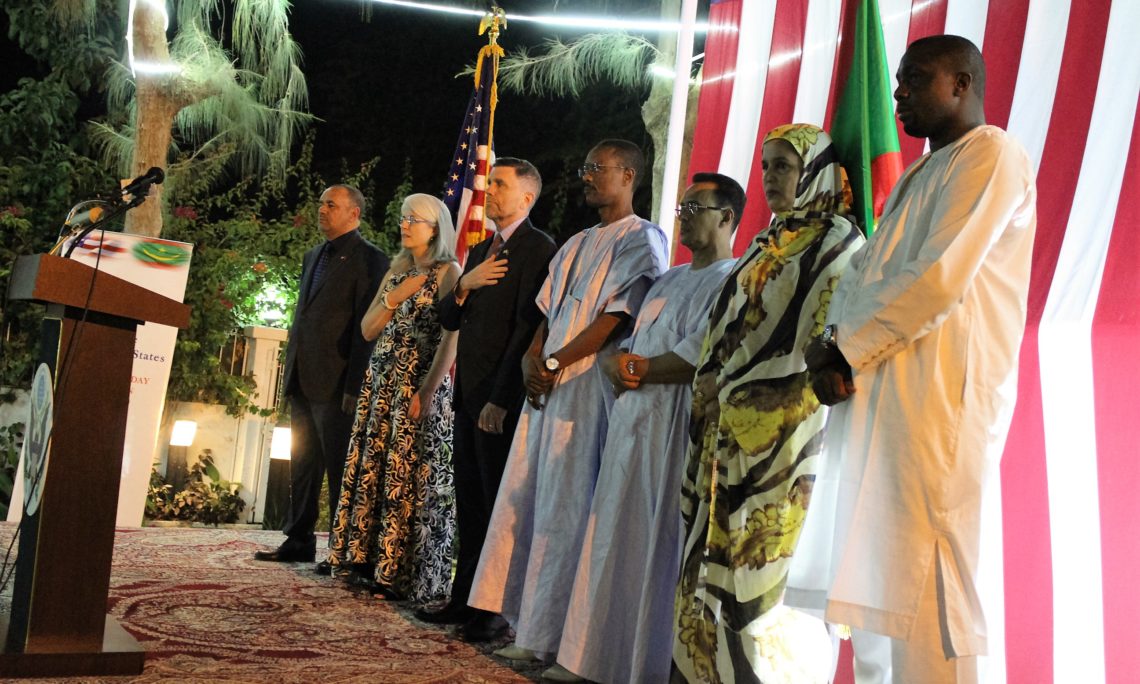 As prepared for delivery:

This is my second opportunity to welcome you to my home to celebrate the 4th of July. I am thrilled that this year my wonderful wife, Joan, is here to join me for this special night.

Joan and I have enjoyed getting to know many of you here tonight. We have also been lucky to be able to travel throughout your beautiful country. We have both become great admirers of Mauritania – of its people and its natural beauty.

Traveling in the north, the south and the east, we have been able to discover the fascinating and diverse beauty of this country: the desert, the river, the ocean, the parks and oases, even the longest train in the world – which I have taken. This is an amazing country.

The people of Mauritanian are just as fascinating and diverse. Joan and I have been so impressed with the hospitality, the talented youth, the spirit of entrepreneurship, and the hunger to learn English. Everywhere we go, everyone wants to speak and learn English. This says much about the future of this country.

I have become not just a fan of Mauritania. I am now a true optimist about this country. I talk about this optimism with everyone. I admit that some people consider that I am too typically American in my optimism. They ask how I can be optimistic given the problems Mauritania confronts – the poverty, the food insecurity, the education system, the legacy of slavery, the challenges of rule of law and corruption. So let me explain why I am such an optimist.

I am optimistic because of the wealth I have seen on my travels. Mauritania’s oil and gas, gold, iron and fish riches, the opportunities offered by the long ocean and river coasts, the underdeveloped agricultural land, the many world-class tourist sites, and of course the entrepreneurial spirit of the Mauritanian people – all of this makes this truly a rich country. Proper management of these natural resources, and a careful plan to invest the game-changing gas revenues that will – inshallah – begin to flow in a few years, will provide Mauritania with the means to address the legacy of slavery, to give every Mauritanian child a quality education, and to lift millions out of poverty.
I am also encouraged by the fact that more and more American businesses are seeking opportunities in Mauritania. I know from decades of work that American companies bring capital, they bring expertise, they bring new approaches to doing business that can make a country more prosperous.

I want to be clear that I am talking about much more than just the oil and gas sector – even if the presence here in Nouakchott of one of America’s biggest companies, namely ExxonMobil, is no small matter. For example, half of our generous sponsors for tonight’s event are in the consumer products sector. And there are many similar opportunities. I look forward to working closely with the new government to organize trade missions and other ways to introduce more American firms to the opportunities here in Mauritania. I am thankful to have the United States Mauritania Business Forum as a partner in these efforts.

I am also an optimist because of the security situation. I commend President Aziz and the Mauritanian security forces, but also civil society and the people of Mauritania, for the collaborative effort to address the security concerns that were so present just a few years ago. I am very proud that American support and training has helped Mauritania in this important effort. That partnership is expanding as Mauritania plays a greater role in the region. In a few weeks, I will be transferring to the Mauritanian authorities much of the $15 million in American support for the Mauritanian troops in the G5 Sahel Joint Force. And early next year, the United States and Mauritania will jointly host dozens of African and European partners here for the large Flintlock military exercise.

Ladies and gentlemen, those are just a few of the reasons why this American is so optimistic about the future of your country, and about the future of our bilateral relations. Why I am so proud to be the U.S. Ambassador to Mauritania at this time, occupying the beautiful new embassy that symbolizes the bright future for our partnership. And very proud that I will – inshallah – be here next year when Mauritania celebrates 60 years of independence, and recalls that the United States was the very first country to recognize your new sovereignty.

And of course, as a friend of Mauritania, I am thrilled to have been here to witness history being made twice last month: with the historic election, and with Mauritania’s first ever appearance in the Cup of African Nations.

To the Maurabitunes and to their fans here tonight, let me pass my heartiest congratulations for the team’s remarkable progress in recent years and for making all Mauritanians proud with their performance in Egypt.

As for the election, let me start by congratulating President Aziz. The United States applauds your decision to respect the constitution and ensure that this year’s election was truly historic – Mauritania’s first-ever transition from one elected president to another. This will be an important part of your legacy, along with the security improvements, the growing economy, and the closer bilateral relations I have already discussed.

I am so pleased that President Aziz and the Mauritanian government are represented tonight by Foreign Minister Ismail Ould Cheikh Ahmed. Thank you for being here and for all that you have done to elevate Mauritania’s standing globally and to advance our bilateral relations.

Second, I congratulate all Mauritanians on the recent election, which was marked by a high level of participation and an honest discussion of the issues that are important to the future of every Mauritanian citizen: national unity, economic opportunity, and confronting the challenges of the country’s past. The voters, the CENI, the candidates, and the press: each was essential to make this election truly historic and an important step in Mauritania’s democratic evolution. We should not let the disturbances the followed the election detract from the historic nature of last month’s vote. But nor can we ignore those events, which are a vivid reminder of the need for urgent action towards national unity and dialogue – something that each of the candidates highlighted during the campaign.

Finally, I would like to warmly congratulate President-elect Ghazouani. The government of the United States, and I personally, look forward to working closely with President-elect Ghazouani and his government on the great many opportunities I have mentioned tonight, to realize the optimistic, prosperous future I see for this country, and to bring the people of our two great countries even closer together.

Friends, colleagues, I apologize for speaking so long and not following the precedent I set last year, but as you can see there is much to celebrate in addition to the birthday of the United States.
Let me close by warmly thanking our sponsors: Seaboard – Les Grands Moulins de Mauritanie, SOBOMA – producing and distributing Coca-Cola products, ExxonMobil, and Kosmos. The fact that we have a record number of sponsors this year is indeed further proof of the positive trends I have discussed tonight.

I want to thank the amazing team from the embassy who put together tonight’s event.

Thank you to the Foreign Minister and the members of the government delegation for honoring us with your presence.

And finally, thanks to each of you for coming to join Joan and me this evening. I hope you will enjoy the rest of the celebration.

Long live the cooperation between the United States of America and the Islamic Republic of Mauritania. Happy 4th everyone!