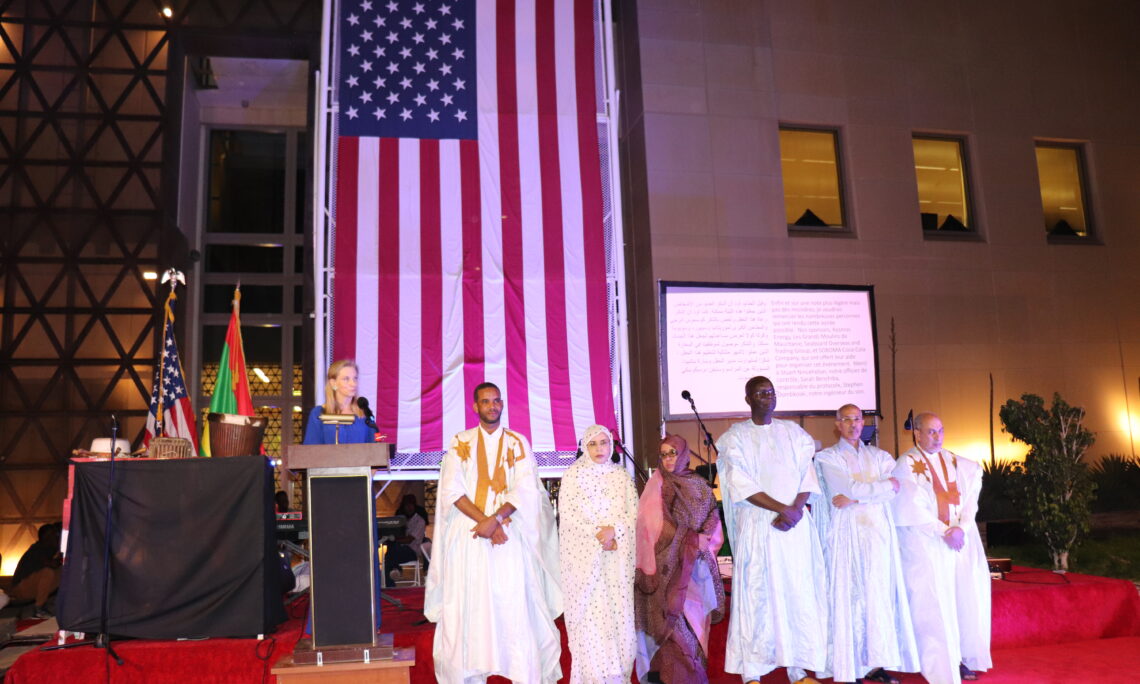 Good evening. Thank you all for being here tonight to celebrate the anniversary of the founding of the United States. On the 4th of July, 246 years ago, the Continental Congress formally adopted the Declaration of Independence, and since then, Americans have recognized the day with celebrations of many kinds. The first 4th of July celebration is reported to have been held in Philadelphia, in 1777. There were bonfires, parades, and fireworks – and a ship fired a thirteen-gun salute to honor America’s then thirteen colonies. This year, Americans in the United States will celebrate with barbeques, picnics, parades, and fireworks. And we will do much the same here this evening. But before we get to tonight’s festivities, I’d like to highlight a few issues of importance to the United States and Mauritania.

Our relationship with Mauritania is a growing partnership – built on shared interests and common goals. We work together daily with our Mauritanian partners to realize Mauritania’s full potential as a leader in regional security, building social cohesion and addressing human rights issues, and supporting an inclusive and diversified economy. In fact, Secretary Blinken met with his counterpart Minister Merzoug just yesterday in Madrid to discuss these issues.

A word on security. Without peace and stability, no country can prosper. I commend the leadership role Mauritania has taken to combat violent extremism within its own borders and in the Sahel region, and the Embassy welcomes opportunities to continue this partnership. In fact, just this past year, the United States deployed a team of special operations experts to train alongside the Le Groupement des Fusiliers Marins; we concluded a multi-year, $14.9 million program for the Mauritanian Battalion supporting the G5 Defense Force; we conducted training with the Mauritanian Air Force; we sent military officers to elite American military institutions to study with their American counterparts; and we trained 66 Mauritanian law enforcement officers through the Anti-Terrorism Assistance program, with much more training on the horizon. Mauritania should know that America will remain a steadfast partner in countering the threats of extremism and violence.

On our shared goal of enhanced social inclusion and human rights, we applaud the important progress made by Mauritania in these fields. As President Biden has said, “Defending human rights and demonstrating that democracies deliver for their people is a fundamental challenge of our time,” and we will continue to work with our Mauritanian partners to ensure that we face this challenge together. President Ghazouani has introduced an ambitious reform agenda to promote social inclusion and to provide access to services to all Mauritanians, and we stand ready to support these reforms. Indeed, the U.S. Embassy has a long history of working with the government and civil society on such issues as ending slavery, protecting women and girls from gender-based violence, and supporting freedoms of all kinds. For years, we have worked in Nouakchott and in the wilayas to promote civic engagement, to support girls’ empowerment and end gender-based violence, and to help build the capacity of schools.

All this good work is possible not only because of Mauritania’s stability, but also because of its democratic development. With upcoming elections in 2023 and 2024, the Embassy looks forward to supporting efforts to ensure that all Mauritanians can make their voices heard at the ballot boxes.

And finally, our economic partnership. We continue to focus on expanding our economic cooperation, including through opportunities arising from offshore natural gas, and Mauritania’s enormous potential as a renewable energy producer, as well as in newer, smaller industries. Working through the U.S.-Mauritania Business Forum, we have promoted increased trade and investment in the agricultural, e-commerce, and food manufacturing sectors. We will continue to encourage U.S. businesses to bring their innovations to Mauritania while supporting the Mauritanian government to move forward with economic and regulatory reforms. To better incorporate Mauritanian youth into today’s economy, U.S. Agency for International Development is investing $24 million on youth programs to promote social cohesion and civic engagement and deliver vocational and leadership skills training. The hope is that soon all Mauritanians can fulfill their economic potential in an economy that is productive, equitable, and environmentally sustainable.

Of course, the biggest challenge we have all recently faced is the global pandemic. Through COVAX, we have donated almost two million doses of life-saving vaccines to Mauritania. Our strong cooperation with the Ministry of Health has ensured these vaccines have been distributed throughout the country and has contributed to Mauritania having one of the highest vaccination rates on the continent.

Our contributions to Mauritanian society do not end there. Since 2007, more than 1,300 economically disadvantaged students have benefitted from a two-year English program–affording them expanded opportunities in the world market. More than 500 Mauritanians have participated in our International Visitor Leadership Program, including many ministers, high-ranking officials, academics, journalists, and civil society leaders. And more than 250 Mauritanians have participated in such prestigious education programs as Fulbright in the United States. Exchange programs like these foster linkages between our two countries in profound and lasting ways and give us the opportunity to continue developing mutual respect and understanding.

Finally, I’d like to publicly acknowledge Mauritania’s recent votes at the UN General Assembly in support of Ukraine. Mauritania joined the United States and 138 other countries in adopting a resolution deploring Russia’s aggression and demanding that Russia “immediately, completely, and unconditionally” withdraw its forces from Ukraine’s territory. Our countries also voted together in March to condemn Russia’s attacks against civilians and together we expressed concern about the conflict’s impact on increased food insecurity. These resolutions sent an unequivocal message of support for Ukraine and for international law, including the UN Charter.

I commend Mauritania’s resolve in taking this stand. Like you, I am horrified by reports of unacceptable civilian casualties and massive displacement in Ukraine as a result of Russia’s aggression. The United States strongly believes that Mauritania’s vote in support of international law including the UN Charter will be remembered as the right thing to do.

On a lighter note, and last, but not least, I would like to thank the many people who made tonight possible. Our sponsors, Kosmos Energy, Les Grands Moulins de Mauritanie, Seaboard Overseas and Trading Group, and SOBOMA Coca-Cola Company, for offering their assistance to make this event possible. And to our own Embassy staff who have worked for months on end to organize it – thank you to Stuart Nincehelser, our control officer, Sarah Benchiba, responsible for protocol, Stephen Dombkoski, our sound engineer; thanks to our Public Affairs and Management teams, to our Security team for keeping us all safe, thank you for your invaluable contributions to making tonight happen. And many thanks to the staff of our General Services and Facilities Offices, for all the hours of hard work spent getting the Embassy ready for this party.

And finally, I’d also like to add a special thanks to the talented musicians of the Eleanor Dubinsky Quartet for coming all the way from America to play such beautiful music for us. Welcome to Mauritania.

With that, esteemed guests, please accept my gratitude to you. For being here tonight to celebrate American Independence Day, and for the important work you do each and every day. Now please enjoy the reception. Thank you, remerciement, shukran.
###