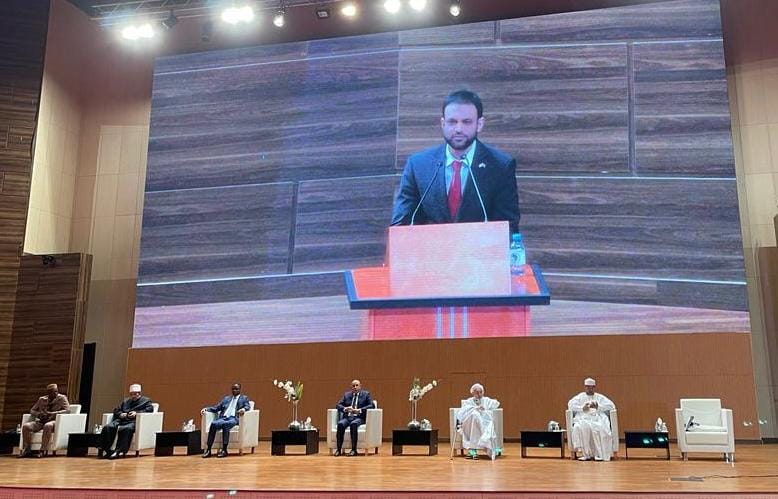 The speech as prepared:

• Greetings Mr. President, esteemed ministers, honored guests, and the young people who inspire us all!

• Thank you, your Excellency President Ghazouani, for creating this important forum and to Minister Ahmed for this invitation. I am grateful for the Abu Dhabi Forum for Peace, which convened this esteemed group of individuals “Making Peace for the World!”

• I am ever grateful for the partnership of Sheikh Abdallah bin Bayyah, whose positive influence on peacebuilding stretches throughout the world. His is truly “a call to life and not to death” as he once said.

• It’s significant that we meet in Africa – a continent blessed with vast diversity and rich cultural traditions of religious tolerance and inclusion. We’ve all faced challenges unlike any in our lifetimes over the last few years: the COVID-19 pandemic, the climate crisis, extremist violence, rising authoritarianism, and others. More than ever, our times call for empowering the voices of civil society, for deeper dialogue and understanding among the religious, the non-religious, those in authority, and those on the margins. We’re united as humans in this difficult moment.

• I have fond memories from my previous visits to Mauritania. I had the honor of participating in the first meeting in Nouakchott in 2012 that led to the creation of the Marrakech Declaration on the Rights of Religious Minorities in Predominantly Muslim Majority Communities. One could say that the road to Marrakech started in Nouakchott. Many of you joined us on January 27, 2016, to “AFFIRM that it is unconscionable to employ religion for the purpose of aggressing upon the rights of religious minorities in Muslim countries.”

• We know that throughout history, a vibrant stream of mutual respect and tolerance for diversity has run through Muslim societies. We’ve seen many Muslim communities prosper when they embrace it. It’s the story of Andalucia and Ottoman Istanbul. Protecting the ability of all people to organize their lives in accordance with their conscience was a key principle in the founding of my own country, the United States. No society represents a perfect example, but each demonstrates that enduring prosperity requires respect for diversity and space for individuals to adopt, change, teach, and espouse their own beliefs. I’m convinced that if all 120 countries represented in Marrakech fully implemented that declaration today, prosperity would quickly follow.

• The strongest defense against the threat of violent extremism and instability is to protect freedom of religion or belief for all. In order to fully contribute to the development of their own societies, everyone must be able to think freely, follow their conscience, change their beliefs if their hearts and minds lead them to do so, and express those beliefs in public and in private. Marginalizing, silencing, and isolating members of minority communities or those whose beliefs differ from the majority’s leaves them disconnected from their government and their own society, and often fearful for their own safety. It can also leave the majority with undue power, prejudice, and hatred. These conditions are fertile breeding grounds for violent extremism on all sides.

• Many of you know my own background. As a Muslim American, I have a deep appreciation for faith and how it orients one’s life choices.

• In this role, I’m building on the work of my predecessors. They include a Catholic politician, a Jewish rabbi and advocate, and a Black woman minister and activist. Each of us was appointed by the President of the United States and confirmed by the U.S. Congress. Our diversity stands for the proposition that these rights matter for all people, irrespective of our particular religion, race, ethnicity, language, or national origin.

• My role is to advise the President, Secretary of State, and senior Administration officials on the challenges to freedom of religion or belief worldwide and how we can address them.

• My team – the Office of International Religious Freedom at the State Department – strategizes daily on how to advance this universal human right globally.

• Around the world, far too many governments and other perpetrators kill, beat, threaten, harass, and jail individuals just for exercising their beliefs. This fact is well-documented. Four out of five people – that’s 80 percent of the world — live in countries with high to severe restrictions on religious freedom.

• Sadly, after centuries of people warring and making peace in the name of religion, we’ve progressed little. Just ask a Uyghur Muslim in Xinjiang, a Rohingya Muslim in Burma, a Jehovah’s Witness in Russia, a Baha’i in Iran, a Jew in Yemen, an Ahmadi Muslim in Pakistan, or a Christian in Saudi Arabia or North Korea.

• We must place the responsibility for these issues where it belongs. We can begin by calling out governments who are focused only on advancing their own geopolitical interests at all costs. Even at the expense of protecting human rights and honoring human dignity. We must also raise our voices to affirm the rights of all and press for their full protection and inclusion in our societies. We need to bolster our relationships with civil society partners, including youth and women, and the collective influence of likeminded governments, and lift up their voices with our own. United, we can advance religious freedom both on the global stage and at the grassroots level. Governments must listen to the voices of their people. To paraphrase one of America’s great leaders, government must be of the people, by the people, for the people. All people, of all faiths, backgrounds, and perspectives.

• In January 2020, the Mauritanian government hosted an impressive conference on Islam’s role in Africa and began noble new pursuits. The Nouakchott Declaration detailed a range of innovative and strategic means to build peace and prevent violence in the region. We applaud Mauritania’s collaboration with civil society, including religious groups, to address violent extremism and terrorism within your borders. You proposed establishing councils of mediation, peace convoys, and collaborating with religious scholars to encourage greater dialogue and understanding of Islamic views. These and the other ideas raised are essential to establishing and maintaining just and equal societies. Societies in which all people, including members of religious and ethnic minority groups, can reach their fullest potential as citizens. I urge you to share what you have achieved so far in your pursuit of those goals, and to discuss ways to keep those ideas at the forefront of your work and policy in the years to come.

• I wish you all great success during this conference! I look forward not only to seeing your achievements, but also to collaborating with you to advance a shared peace and freedom of religion or belief globally. This is a noble struggle in a difficult moment, but we can face it and achieve it together.